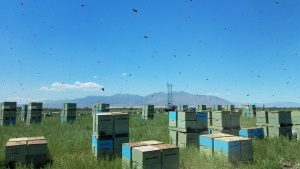 Many people have never been involved in moving a bee yard from one location to another.

First we stage the bees late in the day, if not during the full darkness. Why during the night? This allows all the bees to land at home and not be out foraging for honey or pollen. If you move the hive during the day only sever feet away, a large majority of those bees will land in the old location where they have imprinted as their home location.

Once our truck shows up, the fun begins, actually the stress of driving a pallet loader in the dark is not that much fun. The stress levels are high as we work deliberately to stack all pallets evenly and cube out the semi trailer. 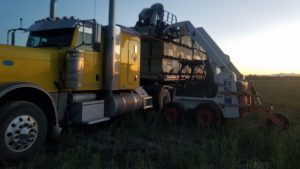 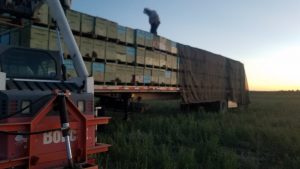 On this hot night the bees were out trying to cool off. We run a tarp the length of the semi-trailer. Then we place boards over the tarp one per row of hives so the straps keep the same amount of pressure directly down on each row of hives stacked three pallets high. Sorry about the first few seconds the video is blurry. Hard to work at night with head protection on.

The last words of wisdom to our driver; “please watch out for deer on the road’. He assures us he has never hit a deer. But 4 years ago, our driver had to brake quickly to avoid a herd of deer on the road, spilling 16 hives. We lost half or 8 hives did not recover. The road was closed for 5 hours as we had to work during the night to clean up, restack and tie the load back down.

But come morning they have a new home. Exhausted. Hungry. We collapse in the truck to get some sleep before we head home. 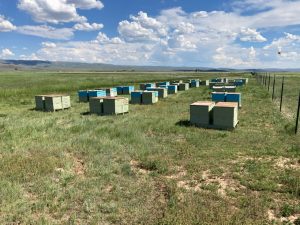 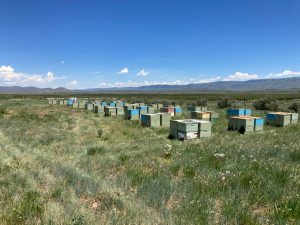 Here are two pictures of eight different bee yard locations where our bees will enjoy the heavy and nectar laden sainfoin crops. 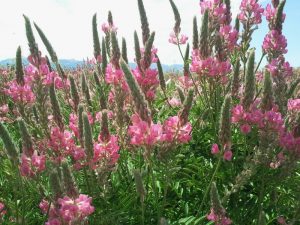 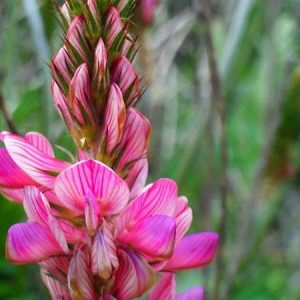 Producing a light, white honey that so many of our customers love! 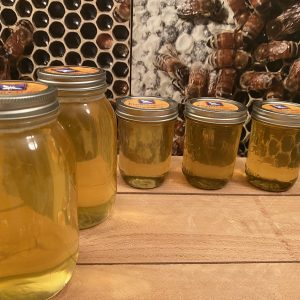 We love our summer bee locations. The land owners are amazing dedicated farmers. No chemicals are sprayed. We have cool clear mountain streams for the bees to drink from. In a drought water is everything. A single bee hive will drink one gallon of water per week. For us, this means thousands of gallons will be needed. Moving Day is a new chapter, but not one that is NOT without stress and hard work. 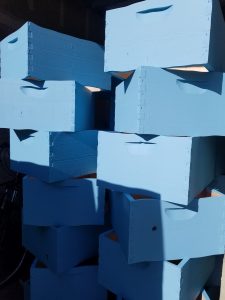 We seem to always be growing. More and more hive bodies are needed to sustain the growth of our new hives. Spring is a time to build and splitting hives is critical to the growth and sustaining strong hives. But this all take tons of materials. For the last 2 weeks we have been planning dozens of boards to prepare for our long build out process.

We recent bought a load of rough wood from a mill in Kamas. The price is right, but it requires a lot of work to get them ready to build.

Here you can see we had to move up to a 20″ industrial size planer to get the job done. The 3 truckloads of saw dust was donated to some horse farms to help with the stalls.

Once we have the boards planed, we then will cut, size, router dove tails, glue and staple each box. 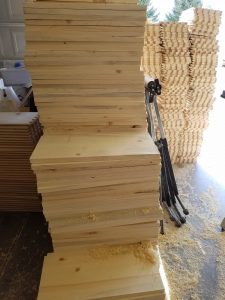 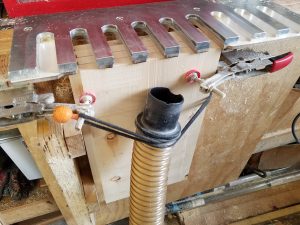 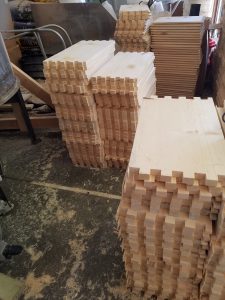 It seems like we handle these boards about 10 times before they are done.

Once we assemble, then they go into the priming and painting stage. 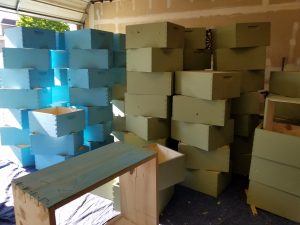 Then the final step is to stencil the Bluebox Honey name. 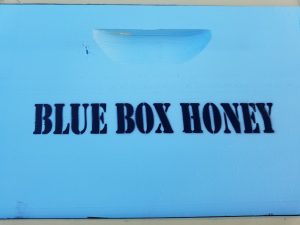 But we are not done yet. The 10 frames needed per box is the final step. 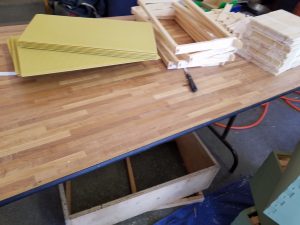 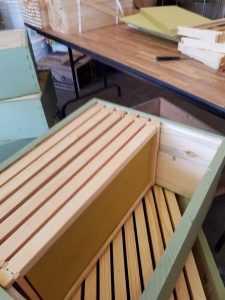 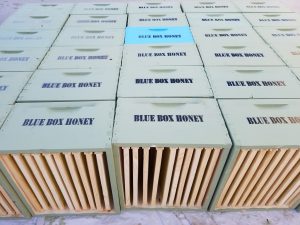 The last step is to load them up on the truck and get them out to the bee yard so they can build out comb and have room to grow from one box to two. This process will be repeated to also add hive bodies for honey production.

One full week, 12 hour days to get it all done. 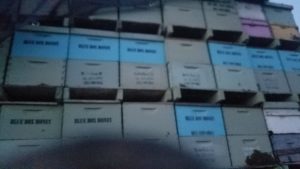 In the spring time after a long winter of hibernation the colony responds to warmer temperatures and the increase of available pollen. This triggers the queen to begin building up her brood to increase the population so the hive can thrive and begin the process of putting up stores of honey in comb.

The outside lying areas within the hive is where the drone comb is drawn out by works for the queen to lay drone eggs. They are generally not found within the large flat area of the frame. In comb twice the size of normal female bees, the queen begins to lay drone eggs. This is nature’s way of beginning the process of growing and splitting to increase the population of bees.

When a number of triggers transpire, a weak queen that is no longer a strong layer, the queen dies, over population, immature queen layers lay new eggs that are found generally at the bottom part of the frame of normal brood. The workers will keep the queen away from these new cells, because instinct is for the queen to open and kill the new queen larva.

Generally, at a time determined by the workers they will take the queen on a swarm flight after the scout bees have found an acceptable new location to nest. The word goes out and the majority of the hive begins to gorge themselves, knowing they will not have food stores for some time. These swarm gorged bees are not aggressive. They just want to follow the queen. Make a new home. Go back to one big happy family again.

Sadly, if weather turns bad, rain or extreme cold the swarm will die. In most instances, the swarm may return back to the hive without the old queen and join forces with the new queen that will hatch from the new queen cell. This lone swarm has a very poor chance of surviving if they stay on this exposed fence post. 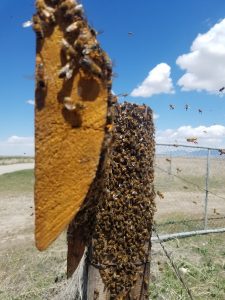 Bee keepers catch swarms because we can take that swarm hive back into the apiary and feed the hive and assess the health of that queen. In our yard we will replace that queen with a new queen cell which we have grown in our ‘queen nursery bank’. How that process works is another subject and story.

So, Swarms are nature’s way of increasing the population of honey bees. I am not sure of the actual percentage of the survival rate of a swarm, but in our yards, they even die sometimes after we have captured them. If we can help them grow a new queen that is strong and healthy we have gained a new colony.

We love when they decide to swarm to our apiary sign. This is a quick catch of the swarm and they will live to grow into a new larger hive. 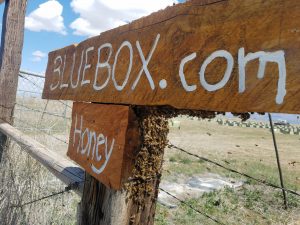 We are firm believers in graphing and growing our own queens. However, this can be problematic when you need 300 – 400 new queen cells to place into walk away splits. A walk away split is simply taking the top hive body off the hive and placing it adjacent to the bottom portion of the hive. Once this is completed, we begin a quick assessment of the hive and ensure that a queen is not in the hive section we place a queen cell in. Our entire yard is mapped with a Bee Yard Management Book. This way we know what and when of the hive activity. It is all recorded on all the actions made to that hive body. We also record it on the top lid. Rain and or early snow and erase those key notes so hence the ‘yard log book’.

Below can you find the queen in this picture. She is a healthy new fertile queen. Ready to begin a new colony and strong hive.

A queen can wait up to 24 days from the time she immerges and completes here mating flight before she will begin to lay eggs. In the meantime the worker bees work frantically to build out comb and establish stores of honey/nectar and pollen in the surrounding out lying comb. The queen then lays the eggs and establishes a ‘brood pattern’ to each frame. 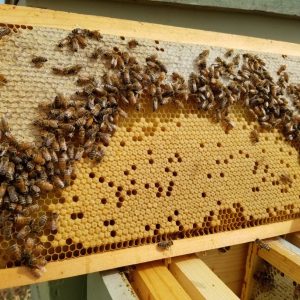 We will feed, treat for mites and watch the hive progression as we watch the brood increase and the hive prepare to receive a second box or hive body. Once we have the hive strong we then will transport them to their summer spring yard where the nectar flows heavy and the hive can begin to add significant stores of ‘sainfoin honey’. But that is another quick story I will talk about later. Here is some footage of a queen quietly working and selecting open comb to lay her eggs.

We're not around right now. But you can send us an email and we'll get back to you, asap.